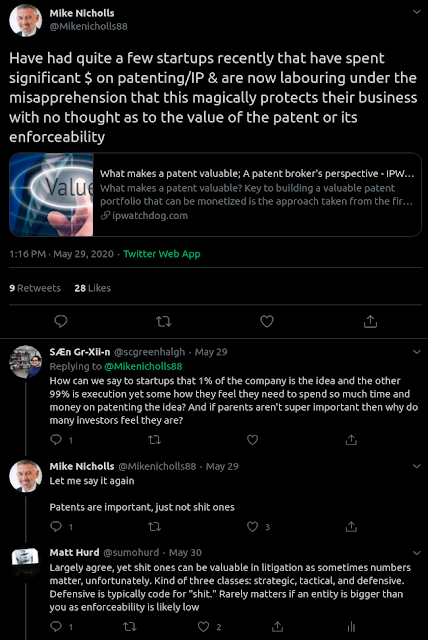 Mike is right, but I nevertheless pointed out that some fairly worthless patents can be valuable when it comes to litigation. This is mainly due to a broken litigation system, not the patent system. You know the story you'll hear all too many times, we have twenty patents you have ten, you pay us $X we agree to cross-license or royalties or some such and everyone moves on.

It kind of makes no sense that the number of patents makes a difference, it often doesn't, but sometimes it does. This comes back to the truth that the law makes little sense outside it being a contract resolution system. It is not a justice system. More often than not, having dollars to proceed on the defence or attack is the determining variable sadly. Also, sovereignty comes into account. There are good stories of getting patents being correctly enforced in China but all too many horror stories. Jurisdiction makes a difference. This also applies to the US. I've a C-suite exec from a large national stock exchange sit across the table from me and declare they don't give a sh@t about our patents as they'll take us down to Texas for their own happy ending. Some of that is bluster but some of it is truth.

In Australia, I've been on the winning and losing argument on patents. The instances turned little on patents but more about the relationships of the parties and barristers to the judge. The winning for me was simply a barrier too far for a mildly-corrupt legal system and judge. Again, almost zero technical merits on one axis yet yielding to technical merit all too strong on another dimension. It's a fuzzy, insecure, personality-driven minefield where strong technical merit does make a difference however it may not.

The strength of the ideas, the drafting, the level of detail, relationships to prior art all matter. Patents not only need to be drafted for negotiation with the patent examiners, but they also have to be drafted with a view to enforceability and defensibility in mind.

I've joked about the weakness and silliness of IEX's patents in the past: "IEX patents" but they serve a purpose in adding value to the misguided eye of the beholder and add to the confused landscape in trench warfare litigation where they may add some value or simply just add to the "we have N you have M" conversation.

As I mentioned in my tweet reply above, I see three classes of patent:
The defensive ones may be a little bit "shit" but they give you numbers and points to argue. You certainly don't want to bother with them unless you're in a space where litigation is common or likely, but on the flip side is it also hard to tell what the landscape will look like in ten years. Tactical ones are often ones to avoid with a start-up too. Tactical patents may be useful if there is a way to retard someone else's path. That is, they'd have to step on your toes. This is your attempt to box them in so they have to drive through your IP to escape. This may encourage them to trade some rights with you if they feel they can't ignore you.

The strategic ones are the ones everyone wants. The clear, good idea that stands on its own for which a competitor can't proceed without clearly using that IP, i.e. outcome is a clear indication of a breach. They are not the most common.

Sometimes a start-up, especially in the service space, is better off with a trade secret and no-patent as their use gives them an undeniable right if it is clearly documented they have commercially used it before some other entity files a patent. The patent dude or dudette still gets royalties from others but can't deny you use. This is not always well understood.

Patents need to be fastidiously correct. It is difficult and hilly terrain. Even today I can see Exablaze or Cisco patents that are invalid because they simply do not attribute the inventors correctly. For some of those patents, I know who made the contributions as I was in the room. Say for the Exablaze hardware matching engine patent which I am listed as an inventor, it would be challengeable as the patent search after filing but before finalisation showed Scott Parsons covered that main territory in a patent attributed to Exegy but the choice was made to patent the work of Exegy anyway.

It is important to think about patents in a broader context. As in the "patent broker's perspective" above, IP has to fit into a more logical strategic, tactical, and execution framework for a business. This includes when to decide to avoid patents. The rules are complex around this and also, like in finance or tax, the rules sometimes don't matter, "US microstructure - why the rules don't matter." That is a slightly facetious way of pointing out there is a long collective history of case histories and interpretations, sometimes in paradoxical conflict, which makes up the historical body of knowledge, rules, and regulation. Without being immersed and familiar with this constantly non-constant sea you are inviting trouble. It is tortuous and dangerous without an experienced guide. This is why we have professionals.

You need an IP or patent attorney that has some years under their belt and has had clients involved in litigation. From first-hand experience, I can say it's hard to find good people in this space. I've run companies and used one of the big IP firms just to have variations of poor drafting, missed deadlines, ass-covering, and advice worthy of a second opinion. In my experience, it simply comes down to finding the right people. They can be at large firms or sole practitioners but you need a well experienced smart person who can delve into the tech synopses, has a strategic mind, is good with detail, and somewhat obsessive about dotting the i's and crossing the t's. In the patent space, they are a rare breed, unfortunately.

It's hard to get good help. Dr Justin Blows at Phoenix IP is my go-to guy in Australia for patent or strategic IP work. He is a clever guy with an optics kind of PhD and deep general technical knowledge. Dr Blows is a little obsessive about filings and deadlines and his system support for such. This is the perfect kind of state you want in your attorney. Attention to detail matters. His strategic thinking about intangibles and the why and when to patent I've probably found the most important. I've learnt a lot in this space and can now confidently say it is not something I can confidently address. Perhaps the most important lesson.

Justin has deep experience and knowledge about all things IP not just in patents but also in how to think about business intangibles and strategy. Though I do keep telling him he is in the wrong country as Australia is a mildly corrupt country with a small venture base and too much unstrategic thinking in the start-up space. Just as most Australian start-ups would be better off relocating to the US west coast or some such, he would also do better elsewhere I suspect, but he seems to like it here.

I have come to the conclusion that any sufficiently advanced subject is indistinguishable from voodoo. I know this all too well as a C++ programmer that has to read my own code I wrote only a year ago. Same with doctors wearing white coats in the hospital. It is hard to find a good expert or even identify one. Hang onto the good professionals you find as they are worth their weight in something not subject to the vagaries of quantitative easing.

Anyway, my advice to you regarding patents is not to take my advice. Find a professional that has experienced the flames of the patent circus and knows strategies for intangibles. Find the right witch doctors for your voodoo needs.

PS: A little update. Still fighting the drama down under. Middle daughter Ali is turning her troubles into strength with Sane Australia which makes me proud. The old-man here in Tas remains ill with a zillion pulmonary embolisms and we continue to fail and try further to get a proper diagnosis for his immunological problems. We've sold his farm and are moving him to temporary AirBnB for a couple of months before he moves permanently to the more covid prone Queensland where his medically oriented daughters can probably take better care of him than I can. A trying eighteen months or two years that never seems to end, but at least only one death in the family so far and hopefully it stays that way for a while...