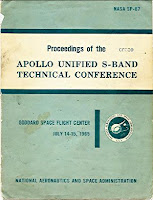 Back in 1969, as a two-year-old, I apparently watched Mr Armstrong take a small step for a sheila or bloke on a dusty rock around 380 Megametres from our pale blue dot.

Communication to the moon and back again was Unified-S-Band, a different USB mnemonic to modern familiarity. The video was frequency modulated and telemetry was phase modulated on the subcarriers:


"The solution was called Unified S-band or USB. It combined tracking, ranging, command, voice and television data into a single antenna. Voice and biomedical data were transmitted on a 1.25 MHz FM subcarrier, telemetry was done on a 1.024 MHz bi-phase modulated subcarrier, and the two spacecraft — the command and lunar modules — would use a pseudo-random ranging code using a common phase-modulated S-band downlink frequency of 2287.5 MHz for the CSM and 2282.5 MHz for the LM. In short, every type of information traveling between the ground and a Moon-bound spacecraft had its place. Except for the television broadcast.

To free up space for a television downlink from the lunar module, NASA removed the ranging code and changed the modulation from phase to frequency. This freed up 700 kHz of bandwidth for a television downlink on the USB signal. The problem was that this wasn't enough bandwidth for the standard video camera of the day that transmitted 525 scan lines of data at 30 frames per second at 5 MHz. Instead, NASA would need a slow-scan camera optimized for a smaller format, 320 scan lines of data at 10 frames per second that could be transmitted at just 500 kHz." [Popular Science, "How NASA Broadcast Neil Armstrong Live from the Moon", 6 February, 2016]


Despite relying on an Australian dish in a sheep paddock, the signalling worked well. The world watched.


I find it interesting NASA is going back to the future. They're using tech based on a 2,450-year-old modulation for their Mars Network being launched in June 2019. ArsTechnica's Jacek Krywko has scribed an enjoyable article, "Deep space dial-up: How NASA speeds up its interplanetary communications" describing NASA switching to Pulse Position Modulation with free space optics, aka Lasers, for the new Mars link.


"A signal sent from Mars is quite energy-starved by the time it reaches Earth, which is why for the deep space optical link demonstration the LCRD will use another terminal working with the more energy-efficient Pulse Position Modulation technology."

The Greeks were first with pulse position modulation as far as I can tell. Here is a technical document from a 350 BC Greek documentation bundle describing the Hydraulic Telegraph:

I suspect good stone documentation lasts a lot longer than magnetic dust. The survivors of World War III may need to rely on such documentation for technical advancement too.

A modern HFT firm uses the same principles espoused by the historian Polybius (ca. 200-118 BC) in "The Histories" concerning the motivation for their Hydraulic Telegraph,


"It is evident to all that in every matter, and especially in warfare, the power of acting at the right time contributes very much to the success of enterprises..."

That is, latency is king.

The Hydraulic Telegraph was an interesting system,


"Aeneas of Stymphalus (known also as Aeneas Tacticus (Αινείας ο Τακτικός)), c. 350 BC, Greek military scientist and cryptographer from Arcadia. He invented an optical system for communication similar to a telegraph: the water-clocks.

The water-clocks are an early long-distance-communication-system. Every communicating party had exactly the same jar, with a same-size-hole that was closed and the same amount of water in it. In the jar was a stick with different messages written on. When one party wanted to tell something to the other it made a fire-sign. When the other answered, both of them opened the hole at the same time. And with the help of another fire-sign closed it again at the same time, too. In the end the water covered the stick until the point of the wanted message."

It was certainly an advance on the optical signalling, or fire torches, they used to cut down the 600km messaging from Troy to Argos to just a few hours circa 1184 BC. Yes, that's right, optical signalling is over three thousand years old.

NASA's Laser Communications Relay Demonstration (LCRD) will use the same ancient Greek modulation technique the Hydraulic Telegraph used to bump up the Deep Space Network (DSN) and the Mar's Link to some hundreds of megabits per second [Ars, Ibid],


"So we postulate deployment of two relay orbiters that should be placed in the circular, equatorial orbit, about 17,300km above the surface of Mars,” Abraham continues. According to the study, such orbiters are estimated to weigh 1,500kg at launch and should have a set of X band, Ka band, and optical terminals powered by 20 to 30kW solar arrays. They should support Delay Tolerant Network Protocol, which is basically a TCP/IP designed to cope with large latencies and the huge delays that are sure to occur in interplanetary networks. Participating orbiters should be able to communicate with astronauts and vehicles on the surface, with ground stations at Earth, and with each other.

"This cross-link capability is very important because it brings down the number of antennas we're going to need to deal with 250Mbps transmissions,” says Abraham.

The Pulse Position Modulation of the hydraulic telegraph was nevertheless made redundant by the more advanced Phyrctoria. Second century BC Greek engineers, Cleoxenes and Democletus, used spatial encoding over an optical channel to represent 24 symbols. Two fire sticks to the left and three to the right and you'll get a message warning post-Hubbard religious types that the Thetan's are about to arrive in their Earth landers. You can see Theta in the second row and third column in the following Pyrseia table:
Nearly two and a half thousand years later, we are completing the loop back to Phryctoria's predecessor, Pulse Position Modulation. Everything old is new again.

So, when you think you have problems with your HFT microwave over the English Channel, think about lasers, the DSN, and 250 Mbps to Mars coming to space agency near you. It's all fun.