General market stupidity - "More than $2B of Inefficiencies Found in U.S. Stock Market"

I always enjoy seeing a bit of market stupidity either in the press, paper, or policy. It reminds me 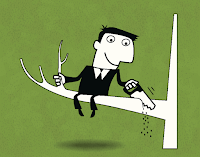 of the many stupid things I've done over the years. It is reassuring to not be alone in the world.

So imagine my joy when I hear about the free lunch theorem violation in the WSJ, "Brief Price Gaps in Stocks Cost Investors $2 Billion a Year" by our old friend Mr Cesary Podkul. Happy Valentine's Day and glory be to the great atheist in the sky.


So all those HFT firms that struggled, failed, had to sell themselves cheaply in 2016, they were just dumb? They forgot to eat their free lunch?

Mr Cesary Podkul is starting to inhabit a regular place in the silliness stakes, though he'll need to lift his game to catch my 51 stupid years of misdemeanours. I was about 15 years old when I figured out an LSE trading model with these Fourier things I'd learnt about that would grow to accumulate more money than planet Earth's money supply. The market data Mike and I hacked by bypassing the $0.10 a page update on stock prices from ViaTel in 1982 on his Amstrad PC wasn't so much the problem then. With dark parallels to that sordid tale, Mr Podkul is overly reliant on an improper interpretation in a new study for his study of that study is a case study for why studies outside your field of study should be studied further for studiously requiring study before you study. Let's meander on.

I remember Mr Podkul for the promotion of the fake WSJ IEX promotion hiding in a flawed study from, “Study Finds ‘Speed Bumps’ Help Protect Ordinary Investors” by Cezary Podkul. I meandered on that back mid last year with "IPCC wrong on climate change & SEC wrong on IEX." That was based around Dr Hu's flawed research paper published at SSRN, "Intentional Access Delays, Market Quality, and Price Discovery: Evidence from IEX Becoming an Exchange." You'd hope Mr Podkul would learn. Alas, not.

I noted back then,


"The paper highlights much of what is wrong with the academic approach to the financial industry. You take a bias and false premise and try to fit a certain outcome."

I could have said that again, but, hey, it's a blog, why pass up the opportunity to quote myself.

These are written in combination with the University of Vermont. They are copyright "The MITRE Corporation" which seems all too proud of their misdemeanours as you can see in the promotion on their web page:
"More than $2B of Inefficiencies Found in U.S. Stock Market" they scream. That's a lot of loose change in the back of the couch. Despite the nice presentation, there is a fundamental problem here. If you think you have found something too good to be true, it is probably not true. It is not true.


If only it was that simple. Amen.

Kipp Rogers, Mr @mechanicalmarkets, pointed out the wild implausibility of:

Market data, even direct feeds are a rearview mirror into the reality of the auction. We guess at the truth. The SIP is a delayed rendition of part of that. All of these systems have flaws and jitter as do the timing and transport systems for measurement and co-location.

If you study the timing between the ES mini and the SPDR, the simplest of arbs perhaps, you'll often figure the market data is faster than the speed of light. How is this so? Well, there are two reasons. Market data is only half the story, order processing and its associated propagation and games is another. Secondly, smart speculation with heuristics, statistics, and intelligence, artificial or otherwise, lowers the latency. Smarts improves latency with uncertainty. It is all part of your extended distribution of opportunity.

Remember, sometimes the SIP is faster than the direct feed too. I'm looking at you IEX, you dumb schmuck latency arb provider, you. Bad boy Brad. Down boy. Down.

Putting that aside, this study is pretty, petty, and shiny; but it is mainly about uneducated noise. Double entendre intended.

I'd also like to meander about the 3ms speed-bump that ICE is going to apply to silver and gold futures. That hall of mirrors argument for introducing inefficiency and poor market microstructure, on purpose as a "Hail Mary" substitute for a lack of growth, is also too stupid to waste too much of your time on. At least we financial types will have nice complexities to keep us all busy and unproductively employed.