"4" by Alexandre Laumonier - "Sniper In Mahwah" 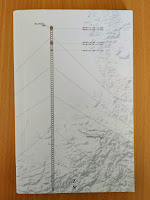 What a lovely object to see in the mail!

It is delightfully packaged and playfully written. The narrative style Alexandre uses draws me in. The compulsion to read more is strong in this one.

The machine translation I'm forced to use as an ignorant non-native speaker is a little inconvenient but it works well for me even if I'd be more comfortable with native English. AI is working well as my I lets me down.

I have a bit to go as it is slow going with my android/google translate from photographed images. Every extra page imaged and translated is a delight. I'm kind of enjoying the reveal of each page. It's very much a low-frequency game that helps distract from the wallabies eating the tomatoes this summer weekend in the land of Oz.

Alexandre has an extract titled "High-frequency trading networks" at Visionscarto. Here is the introduction for you, 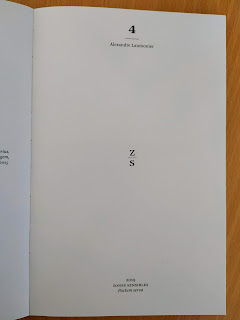 "After the 6/5 works , Alexandre Laumonier continues his exploration of world finance with 4, a new episode of his investigations that has just appeared . This book is entirely dedicated to the history and techniques of the recent radio communication networks deployed by some traders to connect the financial markets with one another. The reason? Radio waves provide the opportunity for market data to switch from one exchange to another two times faster than optical fiber. Having a microsecond ahead of the competitor guarantees gains in what is called high frequency trading. A true ethnological and geographical survey, this immersion in the heart of European networks (mainly from London to Frankfurt) and American (linking New Jersey, Washington and Chicago) is like an epic story.

Here is an excerpt from Chapter 3 of 4, devoted to the first ever microwave network in the United States for a trading firm."

The slight book weighs in at a little over 100 pages. I'm disappointed it is not 300 pages so I might enjoy a longer latency journey but 100 is about right for my manual imaging exercise. It is beautifully published with a seductive wide bookmark showing a silver embossed European microwave map with a grey Chicago-NY map on the flip side.

Enough for now. I have to get back to my phone imaging and translation exercise :-)

Thank you Alexandre for a weekend delight!

Lovely details and anecdotes that only someone as invested in the story as Alexandre could tell. Even those of us in the industry only have a hazy picture of experienced truths, rumour, and beer talk to go on. Alexandre fills in many details with enough fuzz remaining to keep us all curious.

Sniper touches on regulating heel sizes in trading pits, to the Chappe optical telegraph and stock scam, to William Heath on a bicycle, the "American Deer", being replaced by copper wire.

Some fun quotes, if you'll excuse the translation from French,

Market data is now passing through the bell tower, neither seen nor known, and money from traders using McKay's network has indirectly helped renovate the church.

The presence of Jesus below the antennae of traders is common, the crosses having been, before the erection of the modern pylons, the highest structures arranged on the high points, for the same reasons as those justifying the presence of the parabolics in these places: to be visible from afar - this would make some say that, in the heights of the landscape, one religion has replaced another.

While they were visiting the towers, the guys from Jump were asking the pilot to let the rotors spin, in case the authorities had disembarked and they had to clear off urgently.

...the inhabitants of the neighborhood designate under the nickname of "penis." ... His erection was a technical feat...

Once on the platform, they noticed that large parabolics pointing to Frankfurt and London were already there. One of the toughest competitors of the American firm occupied the heights of the cathedral: the Canadians of Vigilant Global, who had surveyed Belgian territory with a length in advance.

in addition to the blog he created to fight against the tower of Canadians, this computer scientist eventually wrote, printed and deposited at home neighbors of anti-pylon leaflets, he was cruelly bitten by a recalcitrant dog that prevented him from accessing a mailbox.

Thus, in Banana Land, the "battle of the two towers" began

The ending prose and pointed juxtaposition of two distant tribes colocating was a nice way to close a continuing saga.