The Wizards of Oz - HFT

The Australia Tax Office publishes the income and tax paid by medium to large private companies. This gives some insight into a few firms, including the occasional HFT firm.

It's old news. I tweeted those results back in December but some meanderers may like to meander over the information too. This is for the year 2016/17, so it's a bit dated.


SIG is split into two for the stuff they can get away with attributing with less ire to Ireland's sandwich economy. 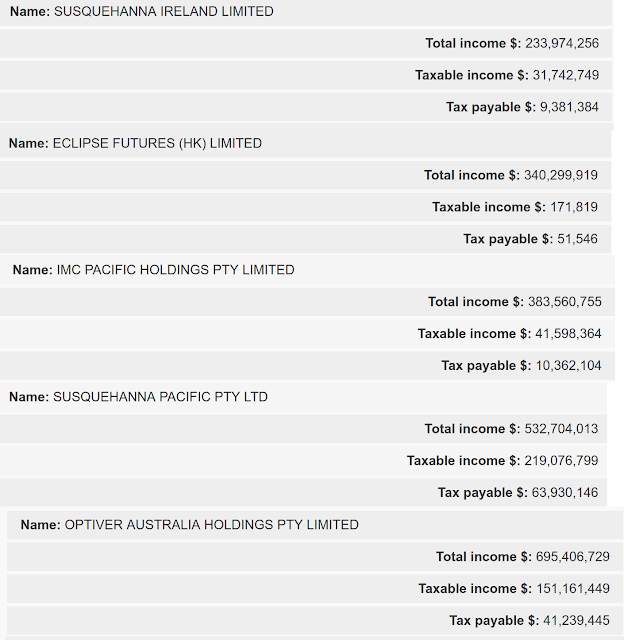 The land of Oz is a wonderful place to be.

MemX - it's also about governance

I received a few nice bits of feedback from yesterday's MemX blog:
MemX - what it's really about

One bit of sage advice I received in a private message was a MemX investor rationale may just be governance or a seat at the table.

That was a way too kind way of saying, without the Mr T voice, "Ya dumb fool, can't you see some of those guys are retail and payment for order flow (PFOF) or otherwise indirect institutional trading?" That is, Ameritrade, Charles Schwab, E-trade, and Fidelity mostly represent retail end-points. Aside from their mutual fund oriented institutional orders, that group represents much of the retail payment for order flow traffic that never hits an exchange. Not so much an order flow securitisation model for those entities.

You see, sometimes a nudge via the internet rather than abuse does actually work ;-)

Virtu and Citadel are two of the biggest PFOF service providers. Thus PFOF interested parties make up a good majority of the board. This is not nefarious but reasonable. Especially in a marketing governance sense. Ameritrade, Schwab, E-trade, and Fidelity all are as good custodians for their retail representation.

PFOF is an uncomfortable virtue of Reg NMS. Such activity is frowned upon or outright banned in most other global jurisdictions of significance. PFOF is a somewhat oxymoronic abrogation fulfilment of best execution duties. Wouldn't the retail customer be better off if the broker didn't pay someone else to execute? Couldn't the retail broker pass both that fee they pay and the PFOF service providers profit on to the customer? Well, no. Reg NMS prevents sub-penny ticks and until the SEC gets off its collective gluteus minimus and allows such, preferably through variable tick sizes, PFOF remains a valid way of benefiting retail via sub-penny price improvement.

Nevertheless, MemX's success will be tied to the success of order flow securitisation from participants as incentives do work. I prefer the governance spin on the indirect market participation. It is certainly kinder than a spin suggesting they are being paid for a lack of agitation. Let's call them astute investors who understand the game. A hedge against a potential regulatory diminishing of PFOF is also a smart play.

Once the SEC is less shutdown it would be nice to see it focus on the worthwhile. Perhaps a variable tick size introduction that includes sub-pennies, rather than the unfortunately dumb and slightly silly fee pilot crapola? For the fee pilot, the most likely outcome remains an enduring argument about meaning or the lack thereof. One would hope you wouldn't operate on a plane in flight without a more careful calibration of potential outcomes and unintended consequences. 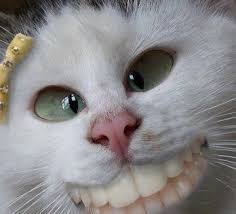 Maybe that is expecting too much of a crazy cat lady SEC. The SEC is the owner of the Crazy CAT.

With billions of future value on the table, expect more order flow providers and capital heavy astute governance providers to join MemX once the reification of abstract potential is more certain. Increasing rounds will suit founders and new capital alike.

Even if we can sometimes come together for common good with good honest fair play and altruism in our hearts, messy creative destruction still seems better to me than the friendly stasis a socialistic mutual creates in this context. However minor, we also have to keep innovation in our hearts. Death through irrelevance and inefficiency is wholly unpleasant.

MemX - what it's really about

MemX is the recently announced pending exchange proposal with support from: 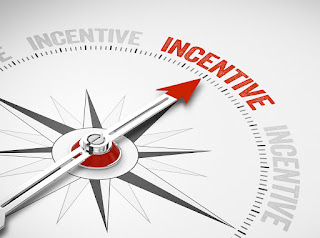 Much of the initial press coverage remarks market participants are frustrated by the fees charged by the larger venues, so - bada-bing - MemX.

Like all incomplete truths, that is a fair rationale but insufficient on its own. There is another important motive the founding firms are less direct about. Let's meander on.

IEX promised simple order types, a fair venue, straight forward pricing and delivered an expensive platform that is largely opaque, very uneven and unfair, discourages risk management during times of change, and, perhaps worst of all, probably violates best execution requirements for many lit orders that get routed to it. Not a fan.

Many sensible participants recognise IEX's shortcomings and keep their order flow away. IEX is thus stuck with a low market share bouncing around a little under three per cent. Fee extortion allows it to be abnormally profitable for a jumped up two-bit bucket shop. Not a great long term plan.

Luminex is another cautionary tale. It is an effort from the buy-side to create their own walled garden where similarly motivated types could trade with each other. It looks well run from the outside but the volumes have been dismal. As I discussed in Liquidity Dancing, it takes two to tango but Luminex dad-dances to the sound of one hand clapping. Diversity is a good thing for markets. You don't want to build a trade wall.

Chi-X Europe (then BATS Europe, now CBOE) grew well because performance warrants allowed order securitisation. It also had a fee advantage and decent tech relative to the incumbents. Still, it wasn't easy. Virtu (nee Getco) drove much of the early order flow thanks to those warrant incentives. Tony MacKay also did a good job of lobbying the buy side to get their brokers to route to the venue.

BATS' Market data was free. The business ran with close to a balanced budget before SIP fee cream sweetened the pie. Dave Cummings is on public record as saying he was disappointed that BATS eventually went to a paid market data model. It will be interesting to see if MemX keeps market data free. I suspect it will.

As per Island, Archipelago, BATS, Chi-X, Direct Edge, the end game will be for a large exchange to buy MemX down the track. One exchange group will do so to protect that slab of market share from falling into the hands of the competition.

The members will then wait a suitable period, as they have post BATS, then rinse and repeat.

Is this a bad thing? I think not. The platform will not succeed without a good game. Best execution regulations obligate that and sometimes partially succeed.  That is, MemX will need a mix of tight technology, fair fares, and meaningful market microstructure to make sense. All these aspects in isolation are necessary but insufficient. It takes a full palette to make an interesting picture.

There are some other innovations that could make sense, but they are, at the end of the day, unnecessary. Good tech, low fees, simple order types, and a fair co-lo will win the day when the carrot of order flow securitisation focuses the mind. Expect the church of MemX to broaden if the execution platform's executives execute excellently - or not too terribly.

It’s been interesting to see Trade Web’s growth correspond to a small, gradual reduction in its large average trade size. BIDS has had the opposite experience with growth from a gradual increase in its modest average trade size. Luminex continues to prove that a walled garden, even if run well, is not the best idea.