The mass debates around rebates are coming to the point where the tumult paints rebates more akin to drug trafficking than a sensible approach to attracting custom. 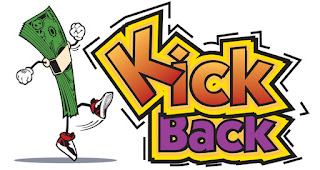 This cult-like lack of economic argument is centred around the Franken-pool of IEX. Mr Katsuyama was quoted by Nicole Bullock in her June 1 FT article, "IEX chief sticks to principles in battle for presence",


“At the end of the day, this conflict between brokers getting paid a rebate by the exchange or getting the higher quality execution for their client — that conflict is going to come to a head and we’ll be the beneficiary of that,” says Mr Katsuyama, who insists that IEX gets better executions for clients.

It's not a rational argument and a typical misdirection from IEX. The argument is often accompanied by incendiary language referring to rebates as kickbacks. For example, here is Mr Elvis Picardo writing in Investopedia, as replicated by Forbes, from April 2014, "How IEX Is Combating Predatory Types Of High-Frequency Traders",

IEX has referred to rebates as kickbacks, "..it's a kickback.." [4:05]. Kickbacks are normally associated with illegal behaviour. It is not a term that should be used lightly, just as front-running is also criminal and poorly used by IEX. Such aspersions are why the debate gets heated on both sides leading to a lack of rational rationale. IEX fail to recognise that zero pricing for lit at IEX would meet their own description of a kickback as a kickback is a remunerative, not monetary, exchange. Giving something away for free, such as an order execution, might also be considered a kickback; as may something for a discount. So if rebates are kickbacks, then IEX is also offering kickbacks. It becomes a matter of degree. Loss leaders at a store would also be a kickback. It's a silly, shameful argument. Perhaps an exchange offering rebates will sue Mr Katsuyama?

I've written on the subject previously in 2015, "Trading rebates - a choice, not an evil." It is a tired debate. It's really not worth dredging up again, yet here we are. Rebates are often paid for posting prices, sometimes for taking as per inverted exchanges, some charge zero, and some charge flat fees. IEX's dark orders have the highest fees in the industry with 0.0018 per round trip.

There has been much experimentation and it continues. BATS not only offers both maker-taker and taker-maker inverted pricing but has introduced low flat fee pricing at one of its exchange platforms (EDGA) with 0.0003 a side or 0.0006 cost per round trip. May the innovation continue.


Fees, and rebates by implication, were capped by Reg NMS in 2005 at 0.003 per share. I'm not a true blue believer but I can make an uneasy fair dinkum argument for higher fees and rebates that I think is not completely stupid.

Part of the modern problem with PFOF and dark liquidity is that they skin the restrictive sub-penny rule in a way that cannot be approached with penny oriented quotes. I've written about this previously in "Sub-pennies rule!" The supply and demand at a public market are a careful balance of what can be earned in the nett spread which is the sum of the spread, transaction costs, rebates, and other amortised expenses. Changes to transaction costs and rebates affect the desirability of market makers, in particular, to trade at the exchange. If the costs were 0.005 on both sides with an average gross spread of just a cent, 0.01, you wouldn't bother trading there as you couldn't earn any money. That's not completely true as maybe you could pay the 0.005 and do the other side at another exchange earning the cent spread, giving you a positive nett, but you get the idea.

Now if you think about it, a rebate of 0.005 with a cost of 0.005 for the other side, or other 0.005 permutations, could give you the equivalent of a mid-point pricing for trading if you consider a 0.01 spread typical. That could be an argument that holds water for as to why the 0.003 ceiling is currently too low. That is, an argument for a more permissive cap to accommodate innovation is not completely lacking. I don't buy it, yet. I prefer the direction promoted by some at EMSAC that advocate for lowering the 0.003 cap, but I'm not totally convinced.

There may be other ways that exchanges could use fees to combat the advantage that PFOF and dark orders have in skirting the sub-penny rule. For example, imagine that when you submit your order instead of just price, time priority, you pay for a priority level at the price. That price could be negative - a rebate. It would partially change the time priority to that where the priority has a market mechanism, a price. You could make a strong argument for such a beast. I'm not sure how the market would react, but I suspect the exchanges would likely make a lot more money in fees which could be partially rebated back to the customers to maintain a competitive advantage. It is not sub-penny pricing but it is a close cousin. Such a scheme may allow public exchanges to compete more vigorously against the incursion of PFOF and dark orders with their micro-cent fills. I'm not sure I like the thought of this innovation but it has some merit, as do higher rebates.

Overall, I'm agnostic on rebates. I could take them or leave them. Rebates have a useful role in innovation and perhaps there is more innovation yet to come. I do think the current discretion within the 0.003 fee cap is a pretty good balanced result for now. There is certainly merit to both a higher and a lower cap, but crass arguments about kickbacks have no role in the debate.

_________
Update: Mr Osman Awan correctly pointed out on Twitter that it is only fees, not rebates, capped by Reg NMS. There is no reason why a rebate could not be 0.005 today except for the long-term necessity for profit. That is, a rebate cap is implied, not required.