US microstructure - why the rules don't matter

That's a little facetious. Rules do matter except when they don't. 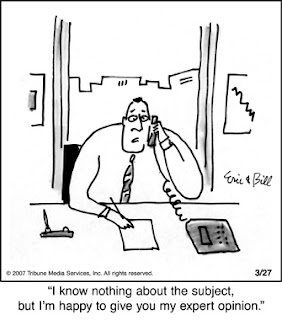 Let's trudge past the click-bait-like title a little to revisit the recent Citadel SEC fine: A tale of two cities' firms.

First a fair warning. This is really not that interesting and you'll have to be a very bored market structure geek to care much about this meandering meander. My advice is to run away whilst you still can.

CES was fined for a lack of disclosure around how their internaliser worked under some limited circumstances. In the article linked above, I explained why I think PFOF and best execution is kind of oxymoronic. Nevertheless, it is useful, and prudent, to remember that the retail punter is better off, on the whole, with CES stepping in and providing general price improvement. CES is a remarkably efficient PFOF machine that benefits many clients. Perhaps the market could do better if given a chance to chew on retail orders? Probably not easily, and perhaps never, especially with the sub-penny rule. It's an interesting dilemma.

All that aside, there were some questions around if, and if so: when and how, FastFlow and SmartProvide at CES would have become improper if they did continue. Larry Tabb suggested such activity was allowed at the time but was not likely to be OK now:

That was interesting as I wasn't sure when or where the regulations made the direct feed (DF) essential if you had access. It still remains that you can use just the SIP if that's all you have, by the way.

Mr Kipp Rogers pointed out the correct FINRA regulation covering this. Kipp also pointed out the preceding reg from the daze of NASD. The text is pretty short. Importantly, all the various versions are also referenced as they changed over time. You won't see any reference to a DF in them there wordy things though. Hmmm.

Let's have a quick looks at FINRA 5310, the pertinent regulation. The particular sub-section reads:

(a)(1) In any transaction for or with a customer or a customer of another broker-dealer, a member and persons associated with a member shall use reasonable diligence to ascertain the best market for the subject security and buy or sell in such market so that the resultant price to the customer is as favorable as possible under prevailing market conditions. Among the factors that will be considered in determining whether a member has used "reasonable diligence" are:


(A) the character of the market for the security (e.g., price, volatility, relative liquidity, and pressure on available communications);

(B) the size and type of transaction;

(C) the number of markets checked;

(D) accessibility of the quotation; and

(E) the terms and conditions of the order which result in the transaction, as communicated to the member and persons associated with the member.


That form of the rule is the latest incarnation, as from 9-May-2014. Some form of this best execution obligation has been a rule effective since May 1968 you'll see in the history listed at the bottom of the reg. I presume preceding 1968 best ex was just a moral obligation if there was no such rule. I expect it was likely covered by some code of practice somewhere. After-all, doing the right thing by a customer is an obvious and indispensable thought.

If you choose to go to the previous version of the FINRA rule, the text of 5310 (a)(1) remains exactly the same for the period covering May 9 2011 - May 30 2012. This is still after the CES fine period. We have to go back to the preceding reg at NASD2320 and look at the third last version to get to the last period covered by the CES settlement:

(a)(1) In any transaction for or with a customer or a customer of another broker-dealer, a member and persons associated with a member shall use reasonable diligence to ascertain the best market for the subject security and buy or sell in such market so that the resultant price to the customer is as favorable as possible under prevailing market conditions. Among the factors that will be considered in determining whether a member has used "reasonable diligence" are:


(A) the character of the market for the security, e.g., price, volatility, relative liquidity, and pressure on available communications;

(B) the size and type of transaction;

(C) the number of markets checked;

(D) accessibility of the quotation; and

(E) the terms and conditions of the order which result in the transaction, as communicated to the member and persons associated with the member.

Yes. It's the same. The regulatory text hasn't changed but what was proper is now improper. So how did it change? How do you know what is the law of the land?

It is unfortunate that reading the law gives not that much understanding of the interpretation of the law. That changes over time. This is a particular case in the point. The Best Ex obligations and wording have remained the same, but the interpretation changed. When you re-read Larry Tabb's tweet above, carefully note the word "guidance." Hmmm.

I asked for a pointer to when that was on twitter. Mr David Weisberger politely replied as follows: 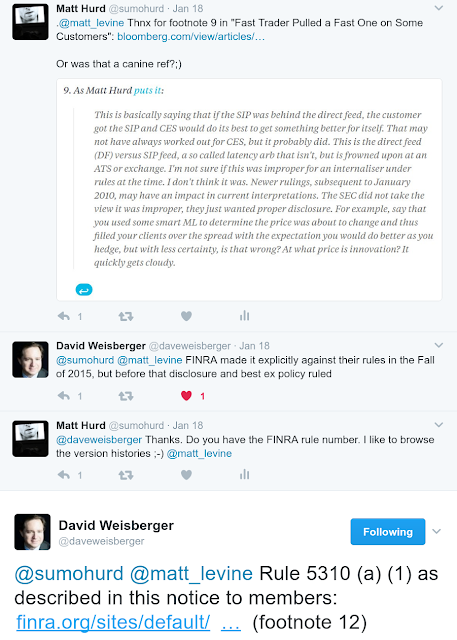 The link to the November 2015 interpretation that mentions DFs in footnote 12 is here, with the following snippets extracted: 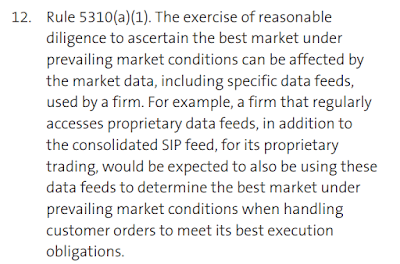 So, that's settled. If you're somewhat unsettled by the settling of something so important in a footnote to a regulatory notice that is not explicitly referenced in the regulatory legalese, then you're not alone. Practitioners in law and tax have long had such problems. Law is set by precedents and interpretations by different strengths of courts and officials. Sometimes concurrently. Sometimes with paradoxical conflict. The sometimes twisty, long history of many of these things matter. Some interpretations will go back to the Magna Carta over 800 years ago so don't feel bad if you're too young to remember the actual regulatory events. It is simply not possible for a mortal to have the collective history of all laws and interpretations, so we rely on study and specialisations. As Matt Levine points out in Marblegate, sometimes we forget about how things became the way they are until cases are lost and then won on appeal when clever archaeology assists the memory reconstruction process to derive the thoughts that once resulted in a heuristic now assumed to be innate,


"There are three possible levels of understanding the law, or a bond document, or whatever:

It is a curse of the modern world. My father opines for a return to an understandable tax system. In the 1960s, when he first became a partner in an accounting firm, he fondly remembers being able to read the tax law in a thinnish but not tiny volume, and digest it, and understand it. Today's Australian tax law is voluminous, cumbersome, and esoteric and yet still likely simpler than the US tax code. One of his practice's partners had deep anxiety about the ever growing complexity of tax. He felt he could no longer serve his clients diligently as he simply could no longer keep it all in his head. This fellow took an early retirement rather than cope with the anxiety of the unknowable that all sensible accountants and lawyers must contain within their true selves beyond the carefully marketed veneer of expertise. Therefore we have the practice of regulatory books reproducing laws along with carefully researched annotations regarding precedents, cases, and interpretations that are necessarily incomplete but serve as the "real" law to most except for the rare exceedingly expert bird.

Market regulation is simply a simpler case of the same lack of simplicity.

That is, market structure is perhaps now getting to a stage where it has a similar need for an interpretive dance book just like larger fields. DF versus SIP for PFOF. IOIs in the dark. Speed bump interpretations and types of delays. The so-called millisecond "de minimis" that isn't a millisecond. Allowable orders. There is an annual interpretive book needed there that I definitely don't want to read but probably would. It would be incomplete, a good start, and cheaper than a poorly focused discussion with a securities law firm.

For now, the bottom line is, you won't know the law if you read the law. Be alert, not alarmed. That's how it is designed to be. You'll need the institutional memory of bright folk like Larry Tabb, David Weisberger, David Lauer, Kipp Rogers, and their kin to keep you straight.

Good luck with that,