After a wee meander, 2017 seems a little weirdly interesting.

Its unicode suggests a year of delta: ߡ. Batten down the VIX then ;-) 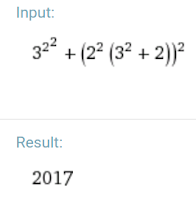 It's a hex of old memories. 7E1 reminds me of the old BBS modem days: 7 bits with even parity. Remember when there wasn't an Internet and no blogs that wasted your time?

2017 suggests it is going to be interesting. Let's hope 2017 is not suggesting an ancient Chinese proverbial curse, "May you live in interesting times." Interesting in a good way would be nice.

Wishing you all the best for your primally odd 2017,