Mellanox's VMA release notes for VMA version 6.6.4 have updated Netperf UDP RR benchmarks. The table below is  for one of their Ethernet cards.  1.1 microsecond is a good result for a well priced and well supported card with a comprehensive feature set.

Not quite Dolphin PCIe territory where they claim 0.74 microseconds but Dolphin's socket implementation on top of PCIe (not Ethernet), if you chose to use it, would make the solution a little worse than Mellanox according to their Dolphin's supersocket reporting (1.26 microseconds).

Has anyone some public SolarFlare or Chelsio numbers? I'd love to compare. 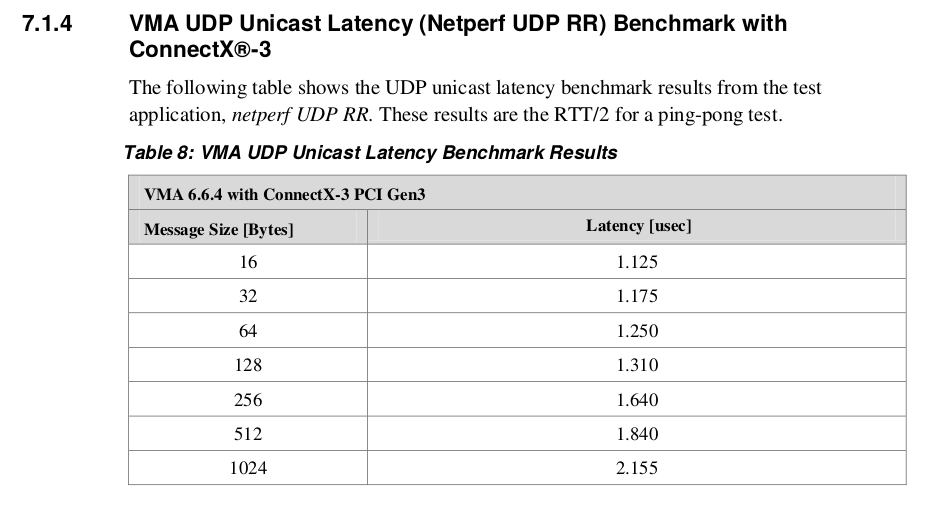 Some interesting, to me at least, news about Zomojo / Exablaze the last couple of weeks.

I hear a bunch of staff have just been fired and are interviewing around town. In fact, I've been told by more than two sources now that Phil Manuel, the SA, is the only full time staff member left at Zomojo with some of the older crew working two days a week with the rest terminated. One of the guys I hired back in 2009 has a one month old baby and a two year old and is now looking for work. Harsh. He is a good guy. Zomojo is evil but there are some good, perhaps deceived, people involved I have considerable sympathy for. Good-luck to them and their families.

I guess it is not surprising to hear how Exablaze are now having yield problems with manufacture as quality problems might be more commonplace with a device you didn't conceive of that requires modifications (the management board was end of lifed, for example). Quality control, tsk, tsk. I can't imagine you'd be feeling comfortable if you were an Exablaze customer.

The two day a week part-time slavery for some staff is interesting. I wonder if it so they can avoid the long service leave entitlements most of them are due? Perhaps it is just a hook to entrap them and keep them from plying their craft elsewhere?

I understand Zomojo capitulated / settled with a trading firm they were suing last year in the first half of 2013. As far as I can tell from the court files, that firm, a completely innocent party, still hasn't been paid their due costs of some hundreds of thousands of dollars for their loss as agreed. That has been drifting out for over a year now. There is another court question this Thursday regarding paying for an IT firm Zomojo had work done last year as part of their legal case against me and that firm has not been paid for over a year now for work done. PPB Advisory should have been aware that if they were going to lie with dogs they may get fleas.

Makes you wonder if Zomojo is solvent?

Then, just now, this article turns up in Korea: FUTURES AND ZOMOJO?! (A better English translation is now below at [2]) I think they may have the wrong broker but the gist of the story may be true enough. The broker mentioned is a solid broker and it would be a shame if they are suffering from an unwarranted Zomojo contagion.

Zomojo lie in court. Zomojo mislead their customers. Greg Robinson was terminated by ITG. Robinson's Bellwether Share Fund investment and directorship didn't turn out too well. Now he has driven Zomojo off the side of the road. He is indeed a man with a black thumb for the corporate garden. If you hear his footsteps behind, you may be justified in quickening your pace.

I do feel a bit sorry for Robinson as one day his family will wake up and realise he is just a pseudo-intellectual fraud.  He is good to have a beer with, pleasant to talk to, have a round of golf with, but deeply flawed nonetheless. A person of no substance. Taking my wife's super from a decades of teaching. Vilifying my father unjustly after went to great lengths to assist them. Robinson is trying to bankrupt the good citizen in his twilight years. Causing my family enough hardship and stress to put one of my daughters in hospital. Nasty. I guess I'm a little biased, so make up your own mind. Caveat emptor.

The second director, Dean Boyle, was just a lap dog sniffing Robinson's butt. However, it is Ian Heddle who is the true despot in that place.  It is not really worth any energy or thought wasted as whereas Robinson is more akin to a knife carrying sneaky fart, Heddle is just a plain sh.... Obvious on sight.

I still hear ex-Zomojo people refer to Heddle as Bubble. I thought the nickname was just because of his bulbous head which is out of proportion with his already large frame. Being above the fray (can't you tell) I never questioned the origin of the nickname. After about a year, I found out they called him that because he was like the boy in the bubble (with apologies to David a heroic lad). Heddle came in to work, never did anything, never interacted and left before anyone else. He lived in his own little bubble. He'd vilify staff and not talk to people for weeks on end, including myself. This is why I left. It was a soundly unpleasant place to work and it got to the point where you just didn't want to turn up to work. Leaving was both the hardest and the easiest decision.

I think the funniest story I've heard about that horrid time is the game some of the staff used to play, "Guess what Bubble is doing today." Each day they'd have a sweep on what he would be doing at exactly 11am, as he didn't do a great deal at all. It got a bit monotonous as each day it turned out to be browsing the web. Every day. All day even. Not just 11am. Worse. The guys couldn't break it down much further as it turned out to be almost always cartoons. Not the graphic novel, mature, artistic kind. The simple kiddie stuff in the main. The game was retired as it turned out to be a closed ended problem and of no scientific merit or wagerable outcome.

I can't imagine why Zomojo no longer makes money and have reduced to a skeleton staff . Can you?

[1]
PS:  I still own a third of Zomojo Trading Pty Ltd. No annual reports. No information at all. It is the vehicle through which all the revenue comes in, or at least it used to be that way. They seem to be violating a bunch of ASIC and ATO rules. Not sure what to do with the holding as I certainly can't afford legal advice any longer.  If you have any creative ideas, let me know ;-)

“A” securities firm director “B” stated, “Hyundai Futures has provided a FEP with direct connection to KRX’s order system to Zomojo for a monthly fee of KRW 200 million”. The director also said “Zomojo directly manages the servers and even install their own programs and place unfair trades”

Zomojo is known to be an algorithm trading firm using their programs. FSS regulation states that firms including Hyundai Future are prohibited to provide clients like Zomojo with special services, information or equipment.

It is also prohibited for the clients to install their own programs as Director “B” has stated. This gives the special clients the advantage by having higher speeds than KRX’s standard compared to normal investors.

On the other hand, Hyundai Futures stated that they have never provided Zomojo with the servers or even opened an account with them. HF representative said, “we are aware that Zomojo is a specialist in the FEP field, and we have met with them, but it was because Zomojo proposed to sell their software to us.”

“We have declined Zomojo’s offer, and the claims that HF is using Zomojo’s software is false.” It has been identified that Zomojo has reached out to other firms as well as HF. Therefore, it is a possibility that other firms also provide services in an unfair manner such as HF.

Person in the brokerage industry stated, ”it is tough to identify if the securities or futures firm is utilizing these programs in the servers without visiting the sites.” “foreign algorithm trading accounts in Korea has reached over 1200 accounts since March”

A KRX personnel said, “only way to identify these illegal algorithm trading is to inspect their IDC directly”, “but even if we charge the firms with suspicion, the firm will simply decline to provide information stating it is their confidential business information.”

FSS personnel said “we have sent guidelines as this has been a problem before”, “instead of criminal charges, it would be easier for the government to address disciplinary actions through administrative measures”